What Does Irish Cream Taste Like? A Detailed Answer

If you are a big fan of coffee and cheesecake like me or have taken a walk into a liquor store, then you’ve definitely come across Irish cream. This intriguing ingredient has demanded attention for years now. But are you wondering what it exactly is and what it tastes like? Come, let’s explore the world of Irish cream. 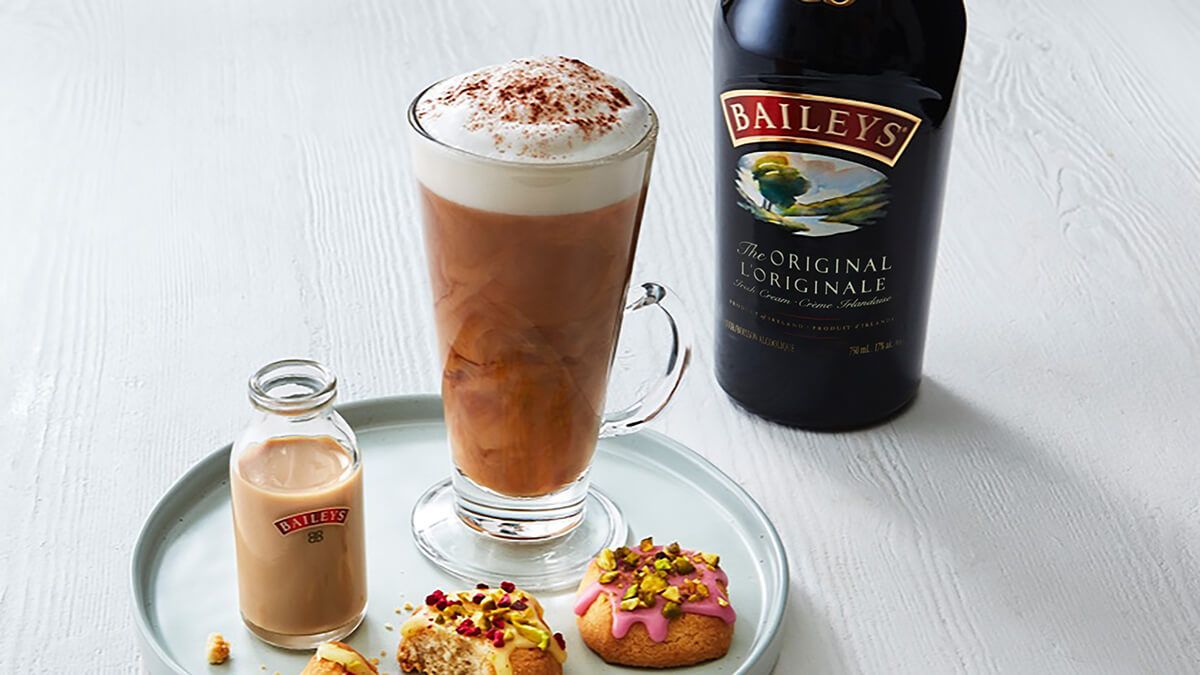 The iconic Irish cream is an alcoholic drink made from a mixture of Irish Whiskey, cream, and cocoa, having a sweet and milky taste combined with notes of vanilla and chocolate and the fruitiness of Irish whiskey. It originated in Ireland under the popular brand name Baileys and was introduced as the first-ever cream liqueur in 1974.

With its flavorful taste profile, this popular alcoholic drink not only made its name for a stand-alone drink, but also made its way into a wide range of recipes. So, without any more wait, let’s get to know more about this world-renowned product created by Tom Jago of Gilbeys of Ireland.

What Is Irish Cream?

The story of the popular Irish cream dates back to the 1970s. It came to existence as a solution to use the surplus of alcohol and cream from local Irish distilleries and dairy factories. These two ingredients were combined with some additional flavors like cocoa and vanilla to create a delectable drink.

Well, whatever the reason may be, the popularity of Irish cream has only continued to increase and has become the top-selling liqueur worldwide.

When it comes to Irish cream, the most common brand known is Baileys Original Irish Cream, which takes the credit for inventing this delectable drink back in 1973. But today, there are other brands of Irish cream liqueur that are worth trying too.

The popular Baileys Irish cream is a liqueur having a sweet, milky taste with hints of chocolate vanilla and the fruitiness of Irish whiskey. Since it’s made with dairy, it’s generally thick, creamy, and rich.

Being a liqueur, Irish cream is served after dinner as a digestif. It is a popular addition to drinks and can be consumed in both hot and cold beverages.

Irish cream has a rich and flavorful taste profile and it’s ideally poured into a glass over ice and has a consistency similar to a milkshake. However, the versatility of Irish cream liqueur is so great that it makes for a great addition to cocktails, shooters, and warm drinks like coffee and hot chocolate.

Apart from these options, you can enjoy its flavor in desserts and ice creams.

Regular Cream Vs. Irish Cream In Terms Of Taste

Irish cream and regular cream are two different things. Irish cream is a mixture of whiskey, cream, and sugar that is pre-blended and sold in the market popularly under the brand name Baileys Irish cream. It primarily uses Irish whiskey as its base. On the other hand, regular cream is a dairy product that contains no less than 36% milk fat content.

In terms of their taste profile, regular cream is mildly sweet in flavor, whereas Irish cream has a sweet, fruity, and milky taste combined with notes of vanilla and chocolate.

Regular cream is used as an ingredient in many foods such as ice cream, sauces, soups, stews, puddings, and some custard bases. It can also be whipped and served as a topping on ice cream sundaes, milkshakes, eggnog, sweet pies, and fruits. In contrast, Irish cream is served straight on the rocks or can be combined with hot or cold drinks.

Baileys Irish Cream is a popular liqueur that is sold all over the world. It has a sweet, rich flavor due to the presence of cream. You can also taste vanilla and chocolate notes, which makes it a perfect addition to desserts. Finally, it imparts a slightly fruity flavor, and alcohol kicks in as Baileys contains Irish whiskey. Baileys, in particular, has mid-strength alcohol at 17% ABV (alcohol by volume).

For all the coffee lovers out there, if you are planning to have Irish cream as a replacement for coffee, that might leave you disappointed. Irish cream on its own doesn’t taste like coffee. It has a sweet fruity taste with hints of chocolate and vanilla. However, to elevate your coffee experience, a little amount of Irish cream can make your coffee more flavorful.

Is Irish Cream Minty In Taste?

Irish cream on its own is not minty in taste, but baileys flavored Irish cream variety: Baileys mint Irish cream comes with a mint flavor if you are looking for one.

Over the years, Irish cream cheesecake has made a well-known name for itself and stands as a good competitor to the classic New York cheesecake. It is a decadent cake loaded with Irish cream, topped with a layer of chocolate ganache, and has a delicious cookie crust. It has the right amount of Baileys that tastes sweet and velvety.

Torani Irish cream is a non-alcoholic syrup made of sugar cane, water, and natural flavors. With its rich aroma, it delivers a taste of robust coffee and creamy vanilla accents it comes close to Irish cream. Torani flavoring syrups are specially formulated to hold up well under heat and resist curdling in milk. It can be added to both hot and cold beverages.

Does Irish Cream Taste Like The One At Starbucks?

According to a Starbucks representative, “Starbucks’ cold brew has a subtle hint of cocoa in the cold brew, and the Irish cream has hints of cocoa and vanilla. So they complement each other well, and they bring those flavors out more.”

Irish cream is arguably the most popular drink that is used in a wide variety of beverages and desserts. If you are only thinking of drinking it by itself, allow me to offer you lip-smacking options to enjoy it furthermore.

1. Coffee– If coffee is your first love, then try adding Irish cream to your hot or cold coffee the next time to elevate your drink to the next level.

2. Whipped Cream– If you are looking to turn your basic cupcakes into a treat to be remembered, try adding Irish cream to your whipped cream for a kick of flavorful taste notes.

3. Martinis – Want to turn your martini into a party showstopper? Look no further and add a dash of Irish cream to your chocolate, Nutella, sugar cookie, or any other martini for a delightful taste ride.

4. Hot Chocolate– Cold winter days call for a hot cuppa. Take that big mug of hot chocolate and surprise yourself with an Irish cream spiking.

5. Milkshakes– Why stick only to the hot stuff on cold days? Switch things up by spiking your regular milkshakes with a hint of Irish cream.

6. Mudslide– A mudslide makes for a perfect dessert cocktail. Its key ingredients include Irish cream in it.

Brands That Have Irish Cream In Their Menu

Due to its raging popularity, Irish cream has also made its way into the menus of popular coffee brands that have made the best use of it. Let’s take a look at them.

Can You Drink Irish Cream On Its Own?

There are only a few liqueurs as versatile as Baileys Irish Cream. This creamy drink with notes of chocolate, caramel, and vanilla makes for one of the best ways to drink straight away or over a mountain of ice. It has the same consistency as a milkshake. However, it is made strictly for adults.

One of the reasons why Irish cream can be had on its own is the fact that despite having alcohol as its key ingredient, Irish cream has lower alcohol by volume and has a sweet taste.

Additionally, the versatility of Irish cream liqueur makes it gain many points. With its rich and flavorful taste, it makes a great ingredient for shooters, cocktails, and warm drinks like coffee and hot chocolate.

How To Store Irish Cream Properly?

Irish cream has a high dairy and sugar content, unlike most other liqueurs. So, one has to be careful about how you store the bottle before and after it’s opened. Here’s how you can store Irish cream to enjoy its full flavors.

Although you can store Irish cream in the pantry, most manufacturers recommend storing it in a refrigerator once you open it. That way, you preserve its original taste longer.

Although freezing a whole bottle of Irish cream is not recommended, you can make ice cubes with Irish cream liqueur. You can use these ice cubes to add to your cocktails or coffee.

It may be surprising to learn that alcohol can do anything good for health. But when taken at a moderate level, alcohol can have a good effect. So, let’s read about a few heath benefits of Irish cream.

Alcohol improves the blood flow rate to the heart. This makes Irish cream a perfect drink for making the heart stronger. Heart strokes can be a nightmare for people, but according to a Harvard study on the benefits of alcohol consumption, a single drink of whiskey a day may help prevent ischemic strokes. This certainly hints at taking that sip of Irish cream.

Whiskey is regarded as one of the best digestifs as it stimulates the stomach’s production of pepsin, the primary enzyme in digestion that breaks proteins down into polypeptides. So, here’s another reason to consider Irish cream that has a balanced whiskey content.

There are 102 calories in a 1 fluid ounce (31.100g) serving size of Irish Cream Liqueur. The calorie breakdown is 43% fat, 25% carbs, and 3% protein. Check out the table below to find out the mineral and nutrient content of Irish Cream.

Hopefully, you have got all your answers to the question, “what does Irish cream taste like?” If you are new to Irish cream, I’d recommend you take a sip to figure out its best use. The results would most definitely be appealing.

Can I get drunk on Irish cream?

As Irish cream contains whisky as the key ingredient, you can get drunk from drinking it in copious amounts.

How much alcohol does Irish cream have?

Depending on the brand, Irish creams have an alcohol content ranging between 15% and 20%. As for Baileys, it falls somewhere in the middle, at 17%.

How much does Irish cream cost?

What is the difference between Baileys and Irish cream?

Irish cream is a drink made of Irish whiskey and cream, whereas Baileys was the first brand to make Irish cream and other flavorings.

How many calories are in it?

With such a sweet flavor, and the word ‘cream’ in its name, a common query about this liqueur is how calorific is Irish cream? One serving of Baileys (37ml) contains 130 calories, 7.4 grams of carbohydrate, and 5.8 grams of fat.

How much does a bottle of Irish cream cost?

The price of a bottle of Irish cream varies from retailer to retailer. A 70cl bottle of Baileys Original Irish cream costs between £12-£15. But other brands are slightly cheaper.

Can I make my own Irish Cream?

You can make your own Irish cream at home, but it’s not as easy. as just mixing cream and Irish whiskey. You’ll need 1⅔ cups of your favorite Irish whiskey, 1 cup of cream, and one can of sweetened condensed milk. For the flavoring, you can add three tablespoons of chocolate syrup, two teaspoons of vanilla extract, and one teaspoon of instant coffee. Blend all the ingredients together and store them in a tightly sealed bottle.