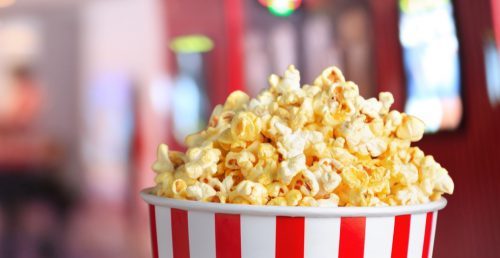 Popcorn has come a long way. Nowadays, butter, cheese, salt, caramel, and chocolate popcorn are all the rage. There are museums and national holidays dedicated to popcorn and they have earned their rightful place in fall festivals, amusement parks, and sporting events. For most however, popcorn is always best paired with a good film.

For many, one of life’s purest joys is sitting on a couch or theater chair with a massive bucket of caramel, salt, butter, cheese, or chocolate popcorn to pop on. Undeniably, popcorn and movies are a classic pair just like peanut butter and jelly. However, not many people know how popcorn became a movie staple.

There’s this common misconception that popcorn is a modern food. If truth be told, popcorn’s origin goes back to thousands of years. In an interview, writer Andrew Smith revealed that the earliest variation of the maize that led to popcorn was first discovered in Central America around 8,000 years ago.

In recent years, some traces of popcorn were also found in 1,000-year-old Peruvian tombs. The Iroquois Nation has also been consuming popcorn before the white settlers confiscated their lands and recipes. New Yorkers, Vermonters, and Quebec settlers are believed to have first picked up the snack from the Iroquois in the 1600s.

Surprisingly, popcorn was the last thing movie theater owners wanted when they began their operations in the early 1900s. Back then, motion picture theaters wanted to mimic the distinguished vibe of performance art theaters. During those times, theater productions were primarily for the affluent.

During the Great Depression, people were finally able to enjoy popcorn without breaking the bank. An integral part of the moviegoing experience included sneaking in bits of food which is what people did even if bringing popcorn in movie theaters was forbidden. Candies like Goobers, Milk Duds, and Baby Ruth were also introduced.

Soon, theater owners began to realize how much people loved popcorn. While they have not figured out the logistics of making popcorn themselves, they wanted to capitalize on it. So theaters allowed vendors to directly sell popcorn in front of their buildings for a small fee.

When the code for producing popcorn was established, some theaters got into the concessions business. Eventually, they realized that removing the middle man means more money, theaters without popcorn machines have lower profits, and popcorn does not rely on materials that are provided by exporters.

By the mid 1940’s, movie theaters and popcorn officially became entertainment besties. The introduction of television caused a temporary dip in moviegoing. However, popcorn manufacturers were smart and introduced home options.

Popcorn became a bigger hit when microwaves hit the scene. When the theaters rebounded, drive-in movies were also introduced and became popular. The tradition of watching a movie with a tub of popcorn became some sort of tradition from there.

The Future of Popcorn at the Movies

While theaters have been shut down for a few months due to the COVID-19 pandemic, things are starting to get back to normal. Theaters and drive-in theaters are starting to operate again and many vendors are also selling snacks again including popcorn.

If anything, it will only be a matter of time until moviegoers flood the theaters again with popcorn in hand. For lovers of movies and popcorn, there is nothing that can keep this amazing duo apart.