10 Jewish Foods To Bring Back 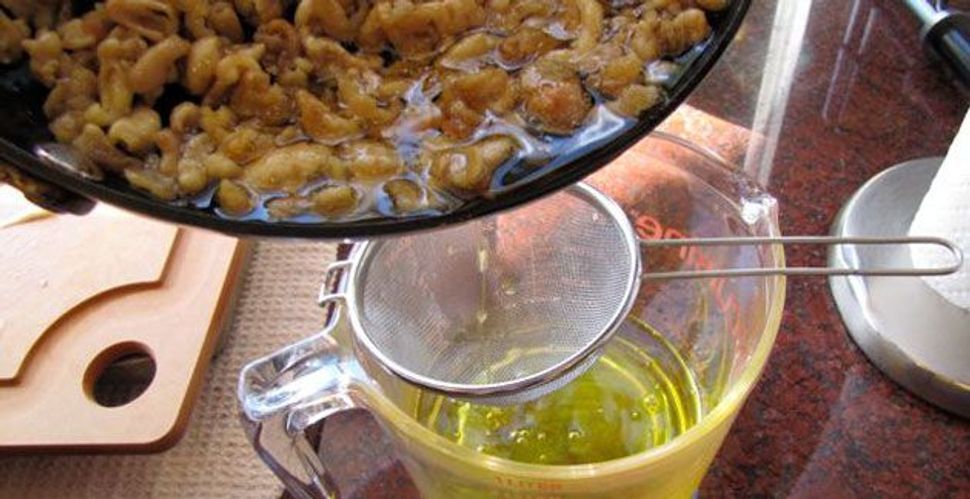 Schmaltz is strained from a bowl of gribenes. Image by Courtesy of Tori Avey, The Shiksa in the Kitchen

The Eastern European Jews who immigrated to America in the early 20th century brought with them the flavors of home — hearty peasant foods seasoned with grease, onions and brine. Out of this gastronomic introduction emerged the delicatessen tradition and a canon of dishes that most Americans recognize today as traditional Jewish fare.

Over the past 60 years, however, many of these classics have faded to near extinction — the victims of changing tastes and our current preoccupation with healthy, low-cholesterol eating. From a nutritional perspective, of course, there is no justification for keeping foods heavy in saturated fats at the center of our diets. But when savored on occasion and with reverence, these Old World foods arguably nourish our souls.

Back in 2011 we turned to the Forward readers for help, asking, “Which foods would you bring back to the contemporary table?” Not surprisingly, the feedback was abundant and passionate. Nearly 100 readers cheered on their favorite Jewish dishes and, along the way, reminisced about family and childhood memories. “My bubbe used to make all of these awesome delicacies… I miss them and I miss [her],” reader Laura Weinberg wrote. And ultimately, aren’t these connections and remembrances what Jewish food is all about?

On that note, here is the Top 10, guided by their responses. Of course, the only way to ensure that these treasured tastes survive is to cook and eat them — so read on, then dig in.

The undisputed favorite among readers, schmaltz — that onion-scented, jellified embodiment of home that Forward contributor Gordon Haber called “early-grave food heaven” — tugs terribly hard on our nostalgic heartstrings. Schmaltz is delicious simply smeared onto hearty bread, and it is also the secret ingredient of many traditional Jewish dishes, from chopped liver to perfectly crunchy latkes. When I was growing up, my mother — typically a champion of healthy eating — kept a jar of schmaltz around on Passover for making matzo balls. Some things are just worth the transgression.

Where schmaltz doth go, gribenes follow — and that includes off of our plates. Those crispy-fried umami explosions left at the bottom of the schmaltz-rendering pan were once a common Sabbath treat. Today, they are mostly a glorious, greasy memory. I first tried them this year, while dining at the home of my friends Naf and Anna (whose kosher, pastured poultry company, Grow and Behold, sells chicken skin for rendering). Resulting heartburn aside, I was instantly converted.

This tart, leafy plant (a cousin of rhubarb) and the brothy soup of the same name have every reason to be favorites among today’s seasonally minded eaters. While schav was once beloved in Eastern Europe, the bottles of murky liquid that populate supermarket kosher sections today have soured its reputation in America. Homemade schav, however, is delightful, and although sorrel is not as widely available as spinach or kale, it can increasingly be found at farmers markets.

Of all the major delicatessen meats, tongue is the least appreciated — a victim of American Jews’ acculturation and growing privilege to say, “Ick, no thanks.” Yet tongue — whether pickled, boiled or roasted and served with mustard and horseradish, or swimming in a sweet-and-sour raisin sauce — has its devotees. It received a surprising number of nods from readers, who must agree with “Save the Deli” (Houghton Mifflin Harcourt, 2009) author David Sax’s description of pickled tongue as an “edible French kiss.”

American Jews still eat mamaliga — they just call it polenta. The two dishes are nearly identical, both the legacy of Turkish rule and both fiercely beloved in their home countries of Romania and Italy. Romanian Jewish immigrants introduced mamaliga to America, where it flourished for decades before falling out of fashion. So the next time you eat polenta, think of Aaron Lebedeff, who, in the famous Yiddish song “Roumania Roumania,” croons: “To live there is a pleasure, what your heart desires, you can get a mamaliga, a pastrami, a karnatzl, and a glass of wine, aha!”

While not one of the most requested foods on the list, russel, or fermented whole beets, is worth revisiting. According to “The World of Jewish Cooking” (Simon and Schuster, 1999) by Gil Marks, Jews throughout Eastern Europe fermented beets between Purim and Passover to “flavor soups [especially borscht], drinks, preserves, horseradish… and kugels.” Russel (Slavic for “brine”) stands as yet another mouth-puckering testament of the Jewish love affair with sour foods.

Jews adore eggs — chopped into salad, scrambled with onions and boiled in a pot of cholent. But eyerlekh (Yiddish for “little eggs”), the creamy, flavorful unhatched eggs found inside just-slaughtered chickens and typically cooked in soup, fell away with the rise of prepackaged chicken parts. Of all the foods on this list, bringing back what my mom remembers as “golden treasures” is the most aspirational. Doing so would require more backyard chickens and a closer relationship with our butcher. Next year in the chicken coop?

Lox and bagels are still the bedrock of a Jewish brunch. But as old-time New Yorkers will tell you, the delicate smoked Nova lox (called that because it was once imported primarily from Nova Scotia) preferred today tastes nothing like the fatty, salty, wet-brined belly lox of their youth. Belly lox is increasingly hard to find, but not extinct. When in New York, head to Zabar’s or Russ & Daughters for your fix, or order online. We agree with the Forward reader with the handle Plays With Food, who wrote, “What’s with this Nova?” Belly lox is the real deal.

While “p’tcha” may sound more like a sneeze than food, calf’s foot jelly has a small but devoted fan base. Eastern European Jews served it with chopped eggs on Sabbath, and in early 20th-century America, it was a staple forshpayz (appetizer) at weddings and Catskills resorts. Today, most American Jews recoil from the thought of meat jelly — but perhaps they should think twice. P’tcha is as economical as it is rich and savory. As Gil Marks writes in the “Encyclopedia of Jewish Food” (Wiley, 2010): “[It makes] one of the least expensive parts of the animal into an Ashkenazic delicacy.”

Readers were surprisingly quiet on the subject of dessert — perhaps because many Ashkenazi sweets are still a part of our cuisine, especially during holidays. But one dessert worthy of mention is aranygaluska (“golden dumpling”), a Hungarian pull-apart bread-cake made from balls of cinnamon and sugar-coated yeast dough, crowded into a tube pan and allowed to rise before baking. The resulting cake (which I’m told my Grandpa Max ate with gusto) is a fluffy, sticky-sweet mess — and entirely delicious.

By Sharon Lebewohl and Rena Bulkin

Originally published on The Jew & The Carrot

2 cups sorrel, or about 20 leaves, cut into ribbons

Originally published in “The World of Jewish Cooking”

Originally published in the “Encyclopedia of Jewish Food”

Leah Koenig writes a monthly column for the Forward on food and culinary trends. Contact her at [email protected]